Background and Aims: N-acyl homoserine lactones (AHLs), which are autoinducer quorum-sensing molecules involved in the bacterial communication network, also interact with eukaryotic cells. Searching for these molecules in the context of inflammatory bowel disease (IBD) is appealing. The aims of our study were to look for AHL molecules in faecal samples from healthy subjects (HS) and IBD patients to correlate AHL profiles with the microbiome and investigate the effect of AHLs of interest on epithelial cells.

Methods: Using mass spectrometry, we characterised AHL profiles in faecal samples from HS (n = 26) and IBD patients in remission (n = 24) and in flare (n = 25) and correlated the presence of AHLs of interest with gut microbiota composition obtained by real-time qPCR and 16S sequencing. We synthesised AHLs of interest to test the inflammatory response after IL1beta stimulation and paracellular permeability on Caco-2 cells.

Results: We observed 14 different AHLs, among which one was prominent. This AHL corresponded to 3-oxo-C12:2 and was found significantly less frequently in IBD patients in flare (16%) and in remission (37.5%) versus HS (65.4%) (p = 0.001). The presence of 3-oxo-C12:2 was associated with significantly higher counts of Firmicutes, especially Faecalbacterium prausnitzii, and lower counts of Escherichia coli. In vitro, 3-oxo-C12:2 exerted an anti-inflammatory effect on Caco-2 cells. Interestingly, although 3-oxo-C12, the well-known AHL from Pseudomonas aeruginosa, increased paracellular permeability, 3-oxo-C12:2 did not.

Conclusions: We identified AHLs in the human gut microbiota and discovered a new and prominent AHL, 3-oxo-C12:2, which correlates with normobiosis and exerts a protective effect on gut epithelial cells. 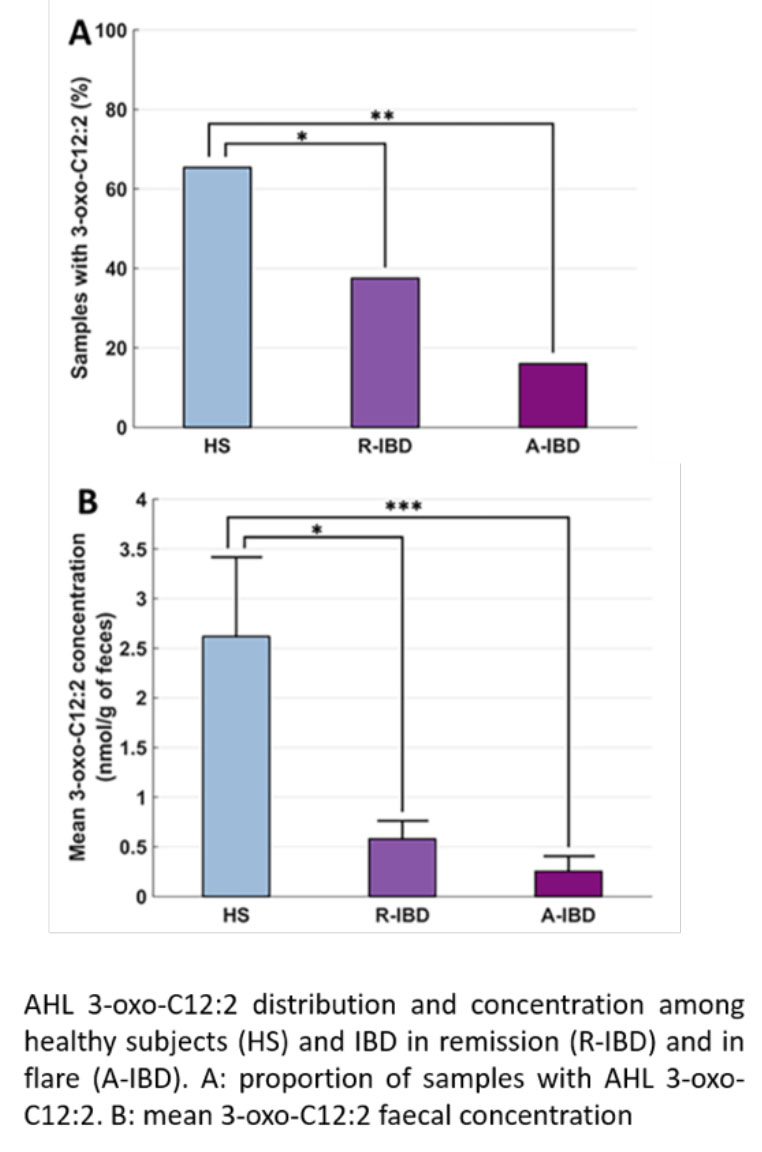